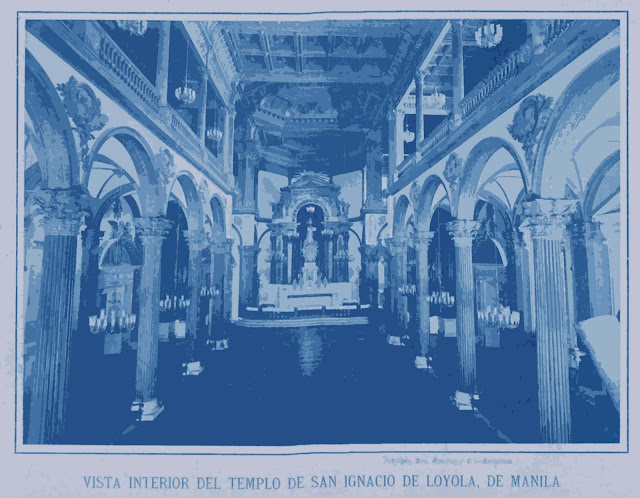 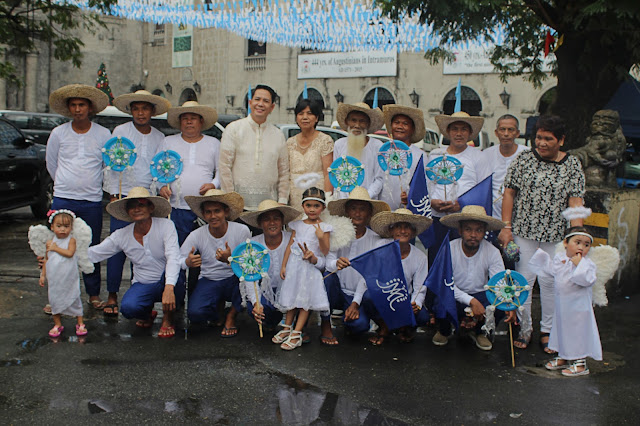 Photograph by Jason Dy, SJ, Courtesy of IA, 2018There are two main components of the project. The primary component is the procession of the pedicabs around the historical and cultural area of Intramuros as a re-enactment of the Marian procession that was either aborted or pushed through on 8 December 1941 during the Japanese invasion of Manila. This promenade investigates the communal faith in times of conflict such as war and foreign invasion as well as the individual appropriation of belief systems of Christianity and Islam (as one pedicab driver belonging to the Islamic Tradition) in times of societal unrest.

Pre-procession preparations consist of a consultation with the pedicab drivers including a tour of the newly reconstructed structure of the San Ignacio Church, a historical overview of the church, and the Marian devotion in Intramuros; a home visit of the participants by the proponent artist, member of the curatorial team, and some IA staff; the reproductions of the architectural details of the former San Ignacio Church including its interior ceiling, altars, and statues based on the archival photographs; a customized upholstery printed on high-grade waterproof material to be fitted into each cab; and the design and production of the drivers uniform. 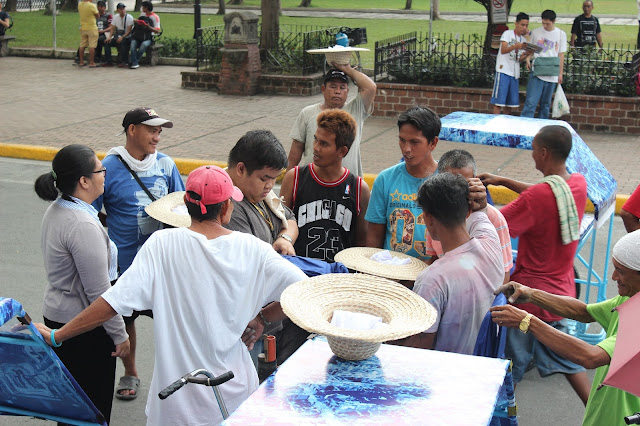 Photograph by Ali Ongsingco, Courtesy of IA, 2018San Agustin Parish organized the first procession. The community of the selected pedicab drivers belongs to this parish administered by the religious order of the Augustinian priests. Through the permission of the parish priest, the pedicab drivers participated in the procession last 8 December 2017 starting from the church courtyard around the main streets of the walled city. Parols and Marian banners also decorated the pedicabs. The pedicab drivers led the procession with their newly upholstered cabs and uniforms together with some of their family members who rode in their pedicabs. Some of their children were dressed as angels. The procession culminated at the church for the mass in honor of the Immaculate Conception of Mary. The second procession is the annual fiesta of Barangay 655 in honor of its patroness, Our Lady of Lourdes. Upon the approval of the barangay council, the pedicab drivers will join the procession after the concelebrated mass at Calle Real on 11 February 2018. Anonymously written prayers will be collected from the community in Barangay 655, be placed inside plastic bags, and tied on nylon strings acting as fiesta buntings. This day is also the ritual blessing of the altars and the pedicabs. Before this barangay fiesta, glass vitrines along with some religious items and other recycled decorative objects were distributed to the pedicab drivers. They are instructed to decorate their respective altars inside the glass vitrines with religious and non-religious objects signifying important aspects of their lives, that is, family, livelihood, and faith.
After the photography session of the assembled altars at the carinderia adjacent to the pedicab terminal, the printed photographs mounted on lightboxes are installed at the side aisles of the San Ignacio Church. These lightboxes are somehow suitable for the church because it is the first church in Intramuros to be lit by “electrica luz” or electric lights. 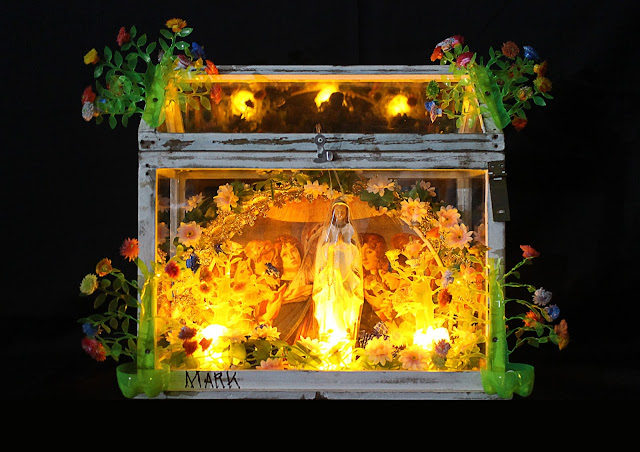 As the 15 lightboxes with independent wooden tripods are assembled along the aisles of the church, they are likened to the traditional Stations of the Cross from the 17th to 20th centuries with an added fifteenth station for the resurrection in contemporary times. In this way, as the visitors walk from one lightbox to another, knowingly or unknowingly, they are doing both an art and religious procession (while outside, the collaborators of these printed images of altars are processing the referent altars inside their pedicabs around Intramuros with their respective passengers). This kind of interior/exterior promenade is investigated by the American writer, Rebecca Solnit. She wondered:

"I always wonder whether the act of promenading past pictures in a gallery has its origins in the Stations of the Cross, which are sometimes remarkable works themselves in the churches from which European art descends; museums such as the Louvre, in expanding the fourteen stations to many thousands make the pilgrim into a wandering tourist and lead not to a culminating spiritual destination but only subjective satisfactions or dissatisfactions and to an agony of feet." 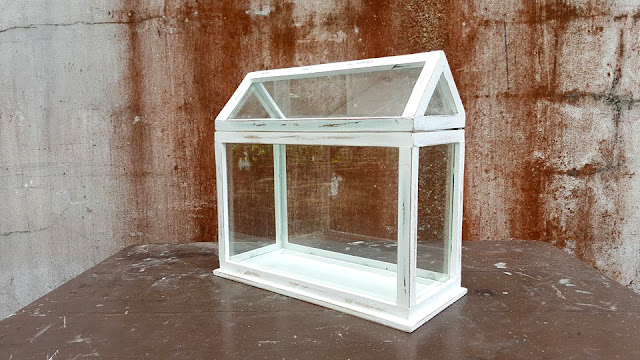 There are three interlocking contexts of this art project. The first one is the history of the San Ignacio Church. In the Intramuros guidebook In And Around Intramuros, the Jesuit art historian Fr. Rene Javellana mentioned that the church building at the Calle Arsobispo is the second structure built using stones of the first one built in 1632 and damaged severely by an earthquake on 6 September 1852. The second structure in Classical and Renaissance style was designed by the first recorded Filipino architect Felix Roxas, Sr. The unheralded, now rediscovered, late 18th-century Filipino master sculptor Isabelo Tampingco designed and executed the wooden interior and statuary of the church. The altars and pulpit were charged to his atelier and colleague Agustin Saez, the director of the art academy in Manila and art teacher at the Ateneo Municipál. During the liberation of Manila from the Japanese forces in February 1945, the church was ruined.

The second one is the devotional Marian procession in Intramuros. Early Spanish historical records Las Anales de la Catedral de Manila indicated that the first Marian procession in Intramuros started on 8 December 1619, the feast day of the Immaculate Conception. This procession was held throughout the centuries of the Spanish colonial rule that lasted as long as fifteen days. At the San Ignacio Church, there was a great devotion to the Santa Maria Purisima (Our Lady of the Immaculate Conception) along with the other major devotions to the Sagrado Corazon de Jesus (Sacred Heart) and San Ignacio de Loyola. Though there is no available document to prove that the San Ignacio Church participated in the Marian procession, one can infer that the Jesuit fathers participated in this procession due to its Marian devotion, prominent sculpted santo of Santa Maria Purisima, and the church proximity to the Manila Cathedral. During the American period, the Marian devotion continued as evidenced in the Papal Bull Impositi Nobis of Pope Pius XII who authorized the Philippines its patronal feast of Santa Maria Purisima.

On the same date in 1941 of the feast day of the Immaculate Conception, the Japanese forces bombed the American bases in the country, and subsequently on 26 and 27 December dropped bombs on Intramuros that severely damaged the north-east sector of the walled city. Yet one can surmise that on the eve of the Japanese invasion, the devotees already prepared Carrozzas for Marian procession the following day. However, there was no historical record that the procession was held in the morning or it was aborted due to the Japanese invasion.

The last context is the effort of the Intramuros Administration towards the professionalization of the pedicab system. The pedicab drivers will be given lessons in history, courtesy, and professionalism. The proponent of the project will engage the pedicab drivers in order to know their specific contexts like religious devotion and personal history as well as their collective situation as drivers and tour guides. 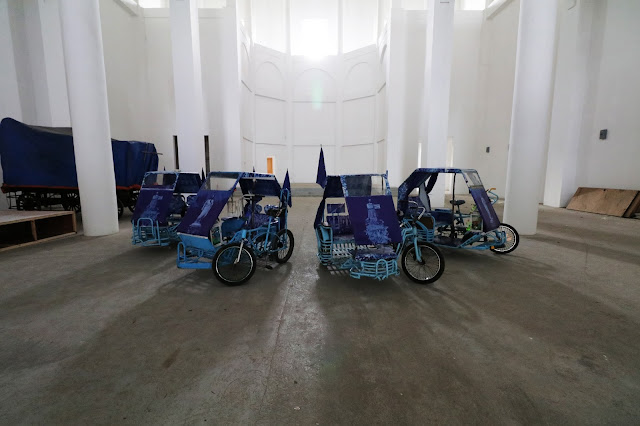 Photograph by Miguel Lorenzo Uy, Courtesy of Art Plus PH, 2018

Art Project:
Procesión de los Camameros (Procession of the Caretakers) is a site-responsive and participatory art project that responds to the history of San Ignacio Church, the annual Marian procession of Intramuros, and the professionalization of the pedicab system by the current Intramuros Administration (IA). As a participatory art project, it engages fifteen pedicab drivers from Maisan Compound, Barangay 655 as the primary stakeholders, namely, Roland “Panoy” Aglinao, Richard “Amay” Ballon, Rodel “Doc” Bersuela, Jomar “Elmer” Cabahug, Mark “Mark” Francisco, Reygan “Butchoy” Linde, Norberto “Buknoy” Malones, Jerom “Bulaw” Mangacoy, Errol “Errol” Montaño, Ricky “Bullet” Navarro, Michael “Michael” Nierras, Rusbel “Beloy” Nierras, Danilo “Danilo” Ortega, Henry “Bai/Pundong” Sumala, and Regie “Poduy” Villa. They are selected together with the officer and staff of the Intramuros Administration present during the orientation day in the first week of November 2017. The secondary stakeholders are the families of the pedicab drivers as well as the local barangay and church leaders. 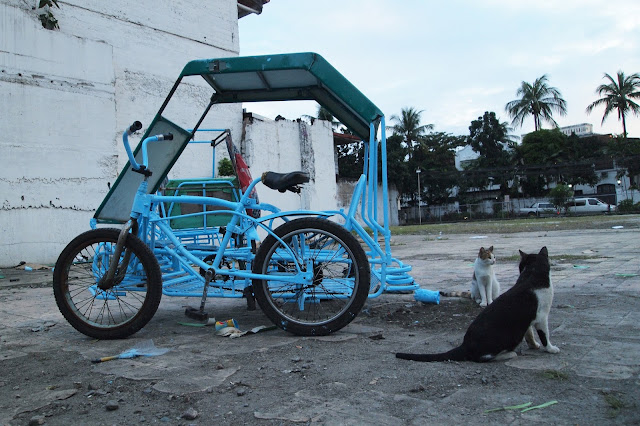 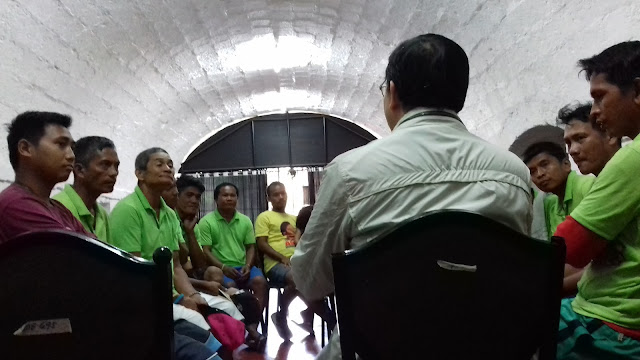 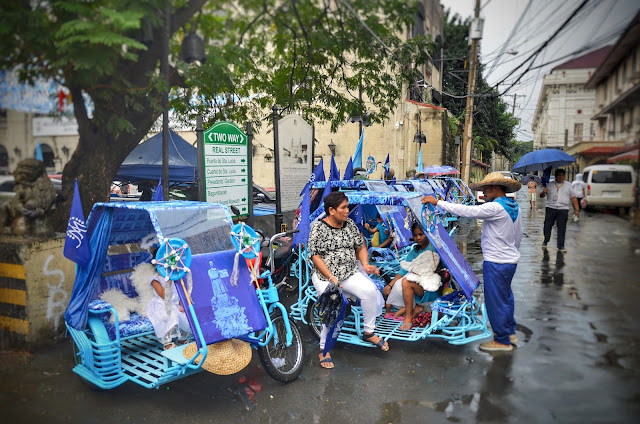 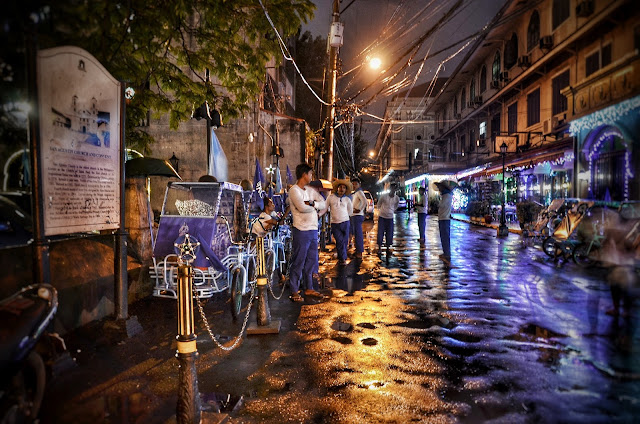 This altar making is inspired by the visit of the individual dwellings of the pedicab drivers. Though most of them have one small room for their family and some accessible only through dark, steep stairways, they have designated a corner as an altar mostly dedicated to the Black Nazarene, Our Lady of Perpetual Help, and the Sto. Niño. Other items such as stuff toys, medals, photographs, and certificates surround it along with the daily offerings of fresh Sampaguita and at times hidden lottery tickets. Taking care of their respective private altars, they can also be considered “camameros.” In embellishing their altars encased in vitrines and displaying them in their pedicabs as they go on their daily routine of driving and touring guests, they, in reality, are having a religious promenade each day. 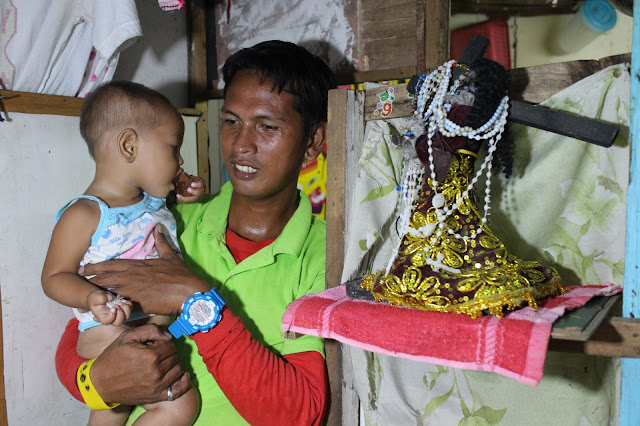 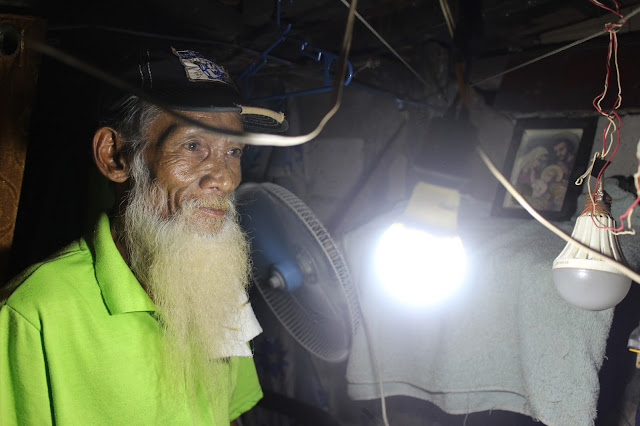 During the whole duration of the Manila Biennale from 3 February to 5 March, the drivers are encouraged to wear their uniforms; share with the passengers the history of the San Ignacio Church, the objects on their pedicab altars; and if possible, bring them to San Ignacio Church. It is a paid trip for its part of the livelihood. Thus, their daily trip around Intramuros is an art tour, a religious pilgrimage, and routine work. 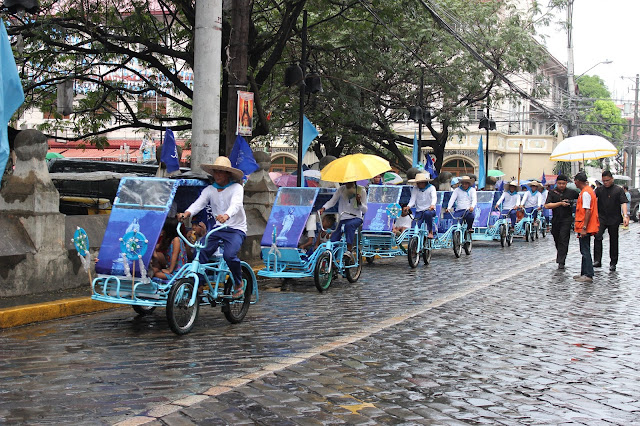 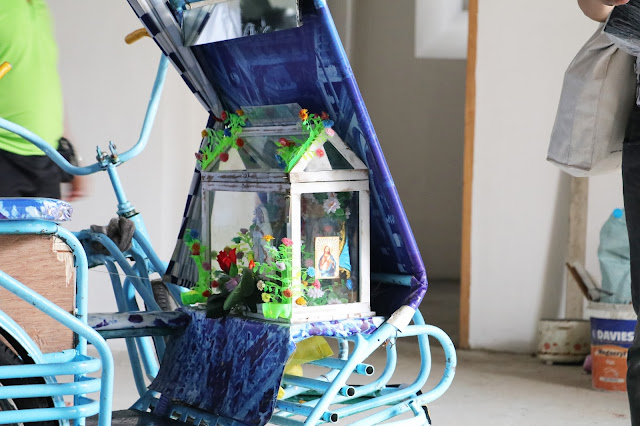 Photograph by Miguel Lorenzo Uy, Courtesy of Art Plus PH, 2018

Due to the specificity, durational and participative nature of the project, the process, production, and implementation of the events are properly documented in photographs and video clips.

Thus, as a priest and artist, the proponent situates the art project, not just a re-enactment of a procession that was either aborted or pushed through but also comments on the performative aspects of art that could have the blurring of the secular and sacred in every pilgrimage of life.

Javellana, Rene. In And Around Intramuros: An Interactive Guide. Jesuit Communications Foundations, Inc., 2003.