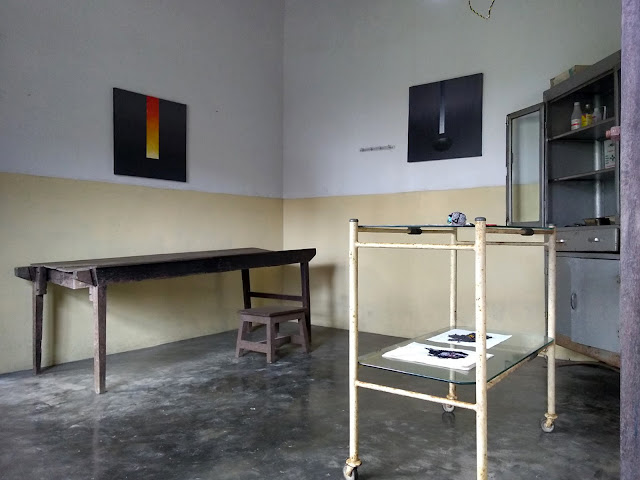 Fallen bouganvel (bougainvillea) in varying petal discolorations of crepey reddish-pink were collected at the front courtyard of Mitraniketan, Wagamon during the first day of the Wagamon Art Workshop (WAW). They were arranged in a radial circular pattern with tonal values of fresh and decomposing bouganvel.

This untitled site-specific floral installation (2019) was an offering of the Jesuit priest and Filipino artist Jason Dy, SJ. It was Dy’s performative homage to the place founded by the Malayalam doctor Elizabeth Jacob-Baker together with her British-born architect-husband Laurie Baker. In Sanskrit, Mitraniketan is a compound word for mitra, meaning, friends, and niketan, home. Responding to the social and medical needs of the communities living in Vagamon mountains of Kottayam District, Kerala, the Bakers together with Mitraniketan Social Service Society provided a sincere space of red bricks and wood to care for the people in the district especially the women and children. In his stay, Dy also found the homeliness of the space as well as the hospitality of the staff and participants of WAW. The floral offering was not only a sensitive referral to the Malayalam religious and cultural ritual known as ‘Kondrai’ or ‘Kannikona’ but also a response to nature’s cyclic rhythm of birth, decay, and rebirth. This rhythm was also manifested in the creative process of the participating artists who were mainly clerics and religious from various Christian traditions found art not just for aesthetic pleasure but a vocation to integrate the path of beauty in their spirituality and varied ministries. Dy had found a kindred spirit with the participants.

Dy initially gravitated towards his on-going art project on nature and spirituality entitled “Listening to the Leaves.” He created the painting entitled “Nava Dwara” (2019) with nine leaf prints arranged in a radial circular pattern symbolic of the notion of the body with nine portals in the Sanskrit scripture Bhagavad Gita (BG). This Hindu text suggests that “the embodied soul lives in the city of nine gates” (BG 5.13). Here, when the body’s embeddedness on its own materiality would be consciously transcended, the person “happily lives within the city of nine gates” (BG 5.13). From the Christian perspective, Dy had interpreted this text as the corporeality of human being that needs to be integrated with the Spirit for the wholeness of one’s person. In the almost graphic composition of the painting, Dy framed the leaf prints with two contrasting color fields, one, was the gradation of dark to brown fecal matter seemingly dripping from the top of the canvas, and the other, was the hues of soft sun atop a green lush mountain rising on the light blue horizon enveloped by the morning mist. These two opposing landscapes of a sewer and a sunrise floating on a sea of whiteness may be pointing to the existential human struggle of evil, suffering, and redemption. 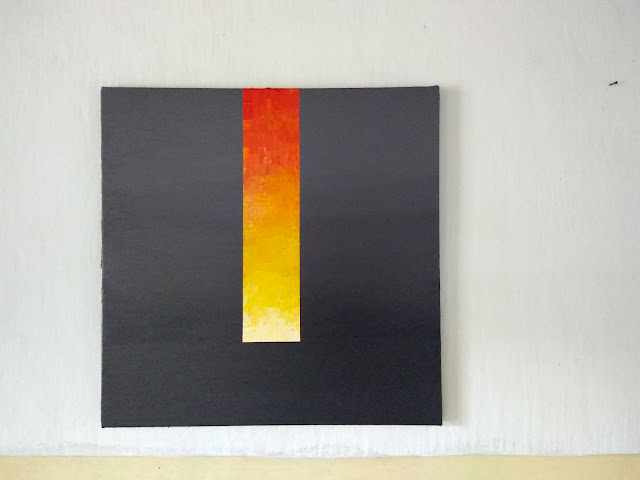 In his further study of the landscape of India, Dy painted a square canvas with a background consisting of gradations of grays. In the middle, he foregrounded a thin strip of graded warm colors of fiery red, ripening yellow, and white tint. He entitled it “Saffron on an Ash Gray Skies” (2019). Saffron, also known as Bhagwa, the most important color in Hinduism denotes the virtues of renunciation, disinterestedness, and enlightenment. These virtues are essential when one threads the path of integration in this conflicted world. These are also important attitudes in engaging with the created universe. 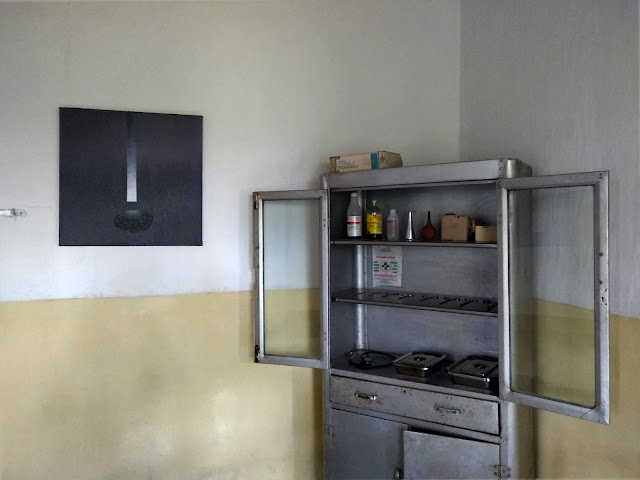 A complimentary painting is “Water Falling on a Rock” (2019). Also in the tradition of minimalist non-objective painting, the Zen-inspired title and aesthetics of the work connect to the origins of Buddhism in the Eastern part of ancient India (now in Bihar, India). In 2007, during his first trip to India as part of the Jesuit Art Workshop (JAW) organized also by Rappai Poothokaren, SJ at Tarumitra, Patna, Dy visited Bodh Gaya, the pilgrimage site for Buddhists as the holy place where Siddhārtha Gautama was enlightened. As the work suggests the power of soft elements carving holes into hard materials, the painting is a homage to the Creator whose spirit transforms all of creation in a gradual yet laborious way. To labor for the welfare of our common home—the earth, is also the invitation to all human beings as stewards of God’s creation.

Though initially working in the traditional media of painting and leaf printing, during the course of the workshop, Dy had repurposed the discarded cotton waste soiled with acrylic paints into textile-based works. He stitched the cotton threads onto the canvas using needles. Stitching became an act of drawing lines on the paper resembling the threads and cotton waste into images of bridges, kites, dolphins, heart, spears, rose, and coconut fronds. 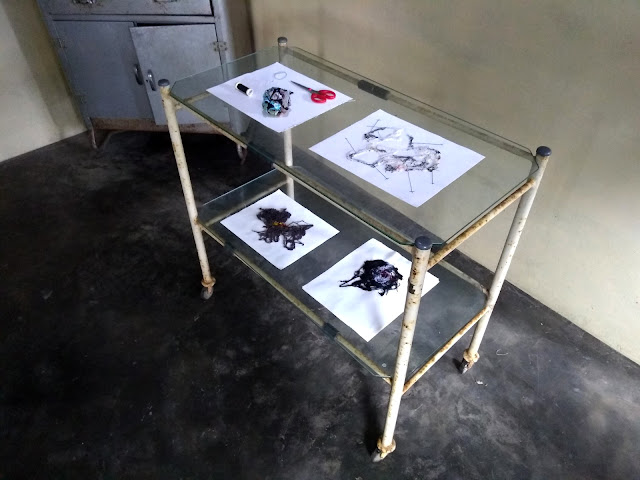 In exhibiting these textile-based works on a hospital push tray along with the needle, cotton waste, and red scissors, Dy interacted with the maternity room with a metal cabinet and two birthing tables designed by Laurie Baker. Like the surgical scissors used properly by the hands of doctors like Dr. Jacob-Baker, the needles, threads, and cotton waste were transformed by the creative imagination and skillful hands of artists like Dy. 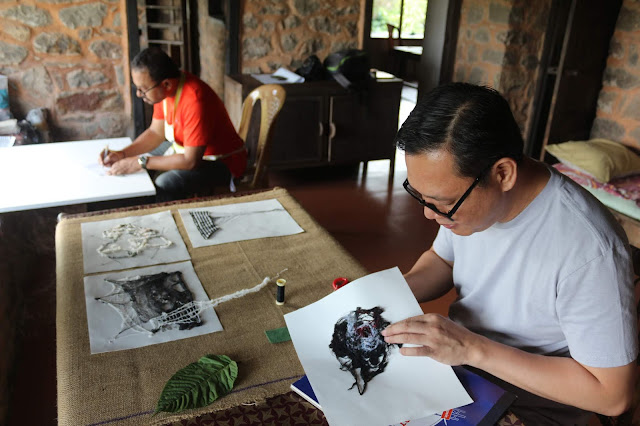 And on the last of the workshop, Dy photographed all the surgical equipment, medical supplies, and medical logbooks inside the metal cabinets. This was primarily his homage to the Bakers. For him, these objects are artifacts of surgical, maternal, and medical procedures that happened in the room. They register the painful incisions that are necessary for the birth of newborns to happen. Like in maternity clinics, growth pains also happen in the artist’s studios or an art residency like in WAW for art to thrive, artists to survive in nature and/or a new environment. Indeed, this growth pain happened to Dy during his art residency. 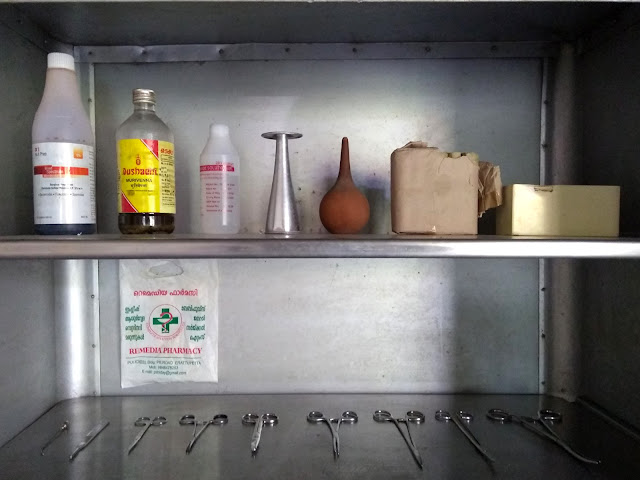