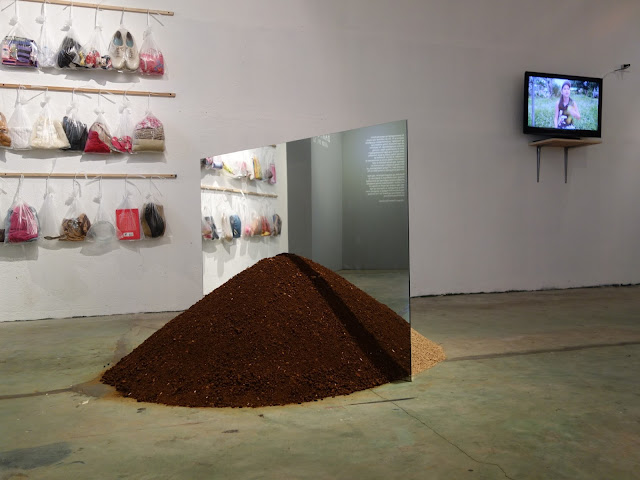 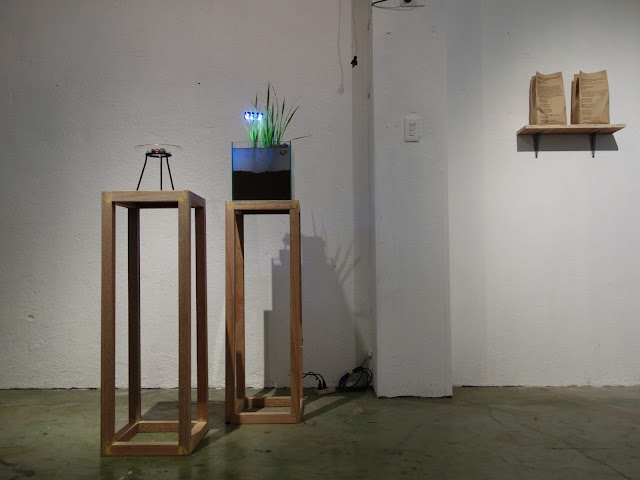 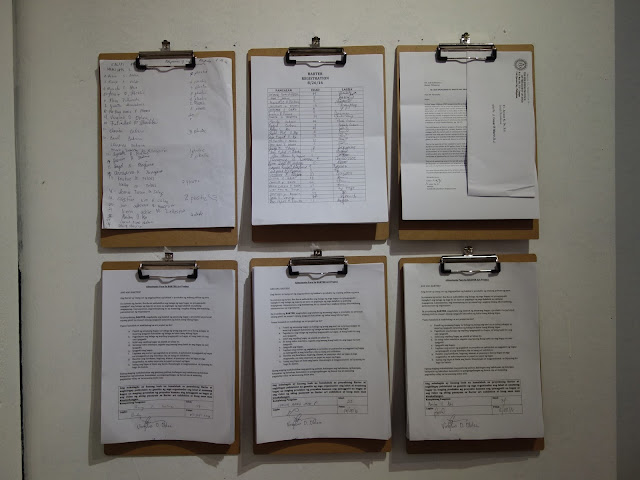 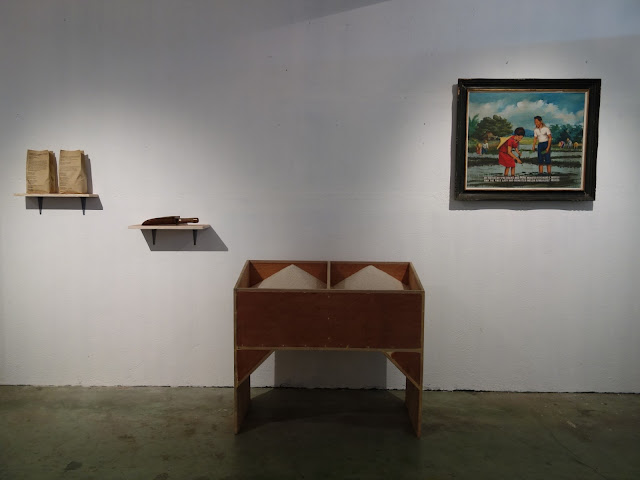 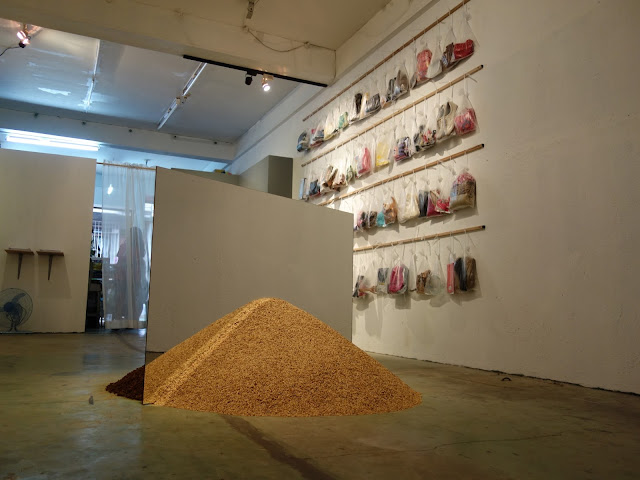 Together, the barter and the exhibition attempt to unearth the notions of value and exchange that inform the dispositions of the community in facing the changes being undergone by Lucban. Here, Dy moves from examining the discreet valuation and bargaining between individuals to a proposed appraisal of the give-and-take between an ostensibly agricultural way of life and the encroaching development that accompanies its growth.

With the barter process, Dy sought to thresh out the notion of exchange and its attendant process of valuation among the participants. Employed as a discursive lens, barter highlights the process of valuation by placing the familiar measures of money at one remove. Bartering for a sack of rice, participants sift through such criteria as gain and loss, frugality and generosity, or equivalence and entitlement, at a more careful pace. The process differed for each participant, whose wide sampling spans various social classes and predispositions.

Within the exhibition, Dy has placed a video and residual artifacts that document the barter alongside cues that broaden the field of discussion. If the barter initiated a re-examination of the process of valuation, the realities and histories touched upon by the objects in the exhibition serve to complicate the process. Whereas trading for an inelastic commodity like rice is pretty straightforward, indeed some would give anything for it, here the prospects of ‘change,’ ‘development,’ and ‘progress’ are laden with tensions, apprehensions.

Altogether, Dy has prompted two questions: by inviting participants to barter he asked, “How do you value?” and by means of the exhibition he sues, “How will you value?”— he has initiated an inquiry and issued a challenge.

The same challenge extends to the exhibition insofar as embedded in the participatory approach is a critique of the passive role of the audience. Thus, by inviting the participatory turn with these questions, Dy has taken steps towards a more meaningful engagement not only with personal or community-based exchanges, but also with art practices. These, however remain provisional due to the fact that the empowering capacity of participatory art draws less from the token of participation but from devising situations that produce questions that hew close to the source of disempowerment. In taking up the question of valuation and appraisal, one needs to ask, “How have we come to value things thus?”

One limitation that hinders the project from raising and addressing such a question thus far is the broad sampling and relatively brief consultation with the community. This has left us with only a vague characterization of the ‘community’ and creates an impression of an even distribution of dispositions. How many of us can really decide on the value of goods? How decisive is a farmer’s voice in the matter of development? Even further: Why should farmers have to barter their shoes for rice, have they not given enough already? Why must they do so anyway?
Surely, the project does not end here and there is yet ample time to broaden and deepen the inquiry using means past an exhibition. Hopefully, this questioning will expand so as to allow us to discern not only the values involved in the exchanges that shape our personal and collective lives but also the structures of exchange, its architecture, if you will, that set the terms of exchange, and that more often than not are warped, privilege the few, and doom the rest to lives of diminishing returns. n
Antares Gomez Bartolome 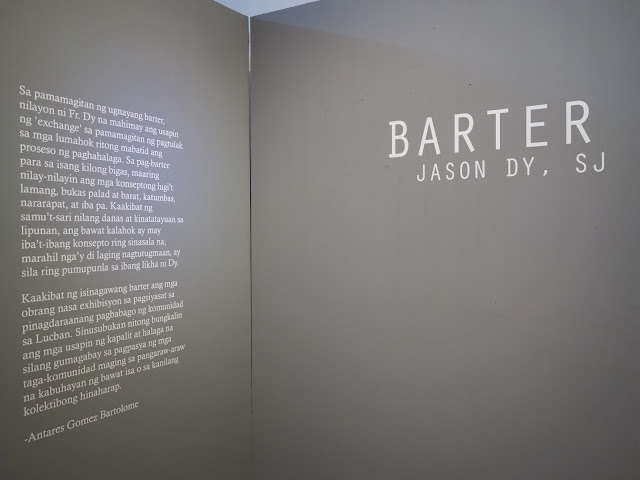 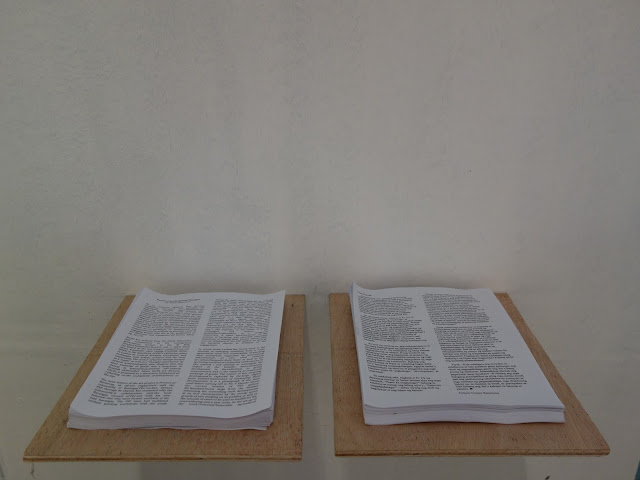 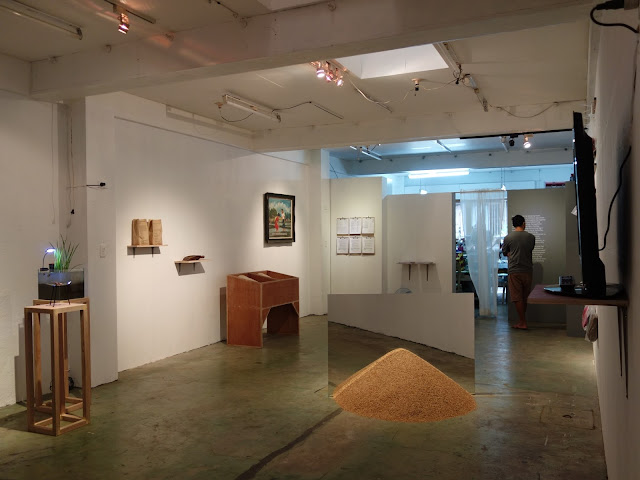 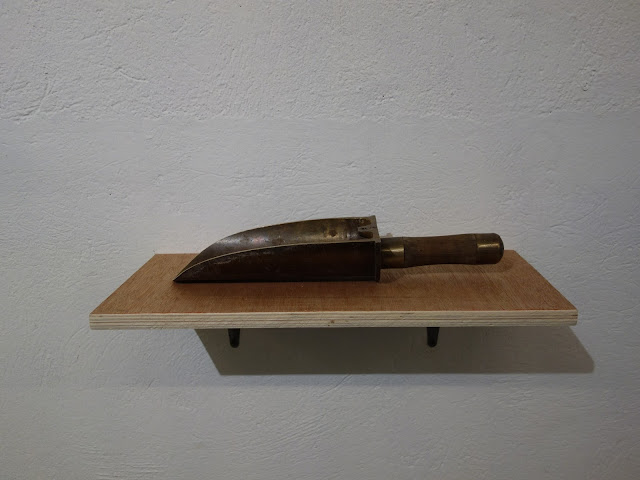 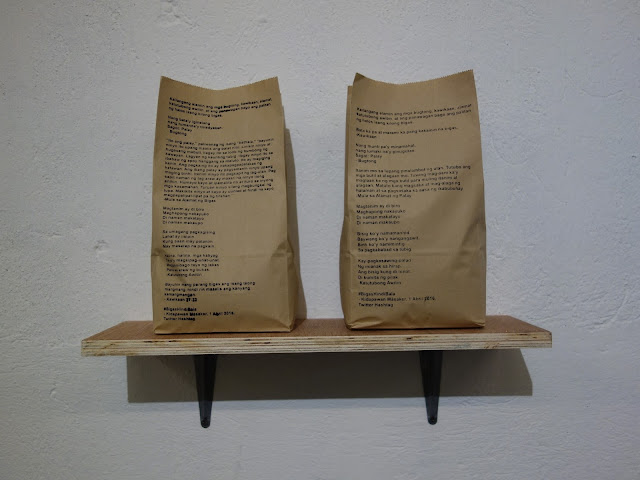 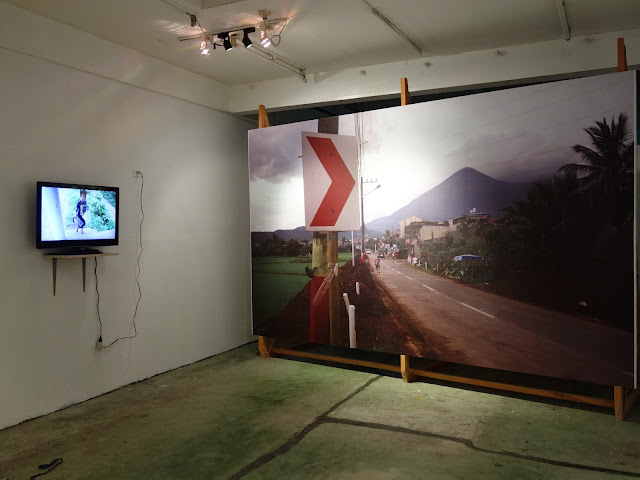 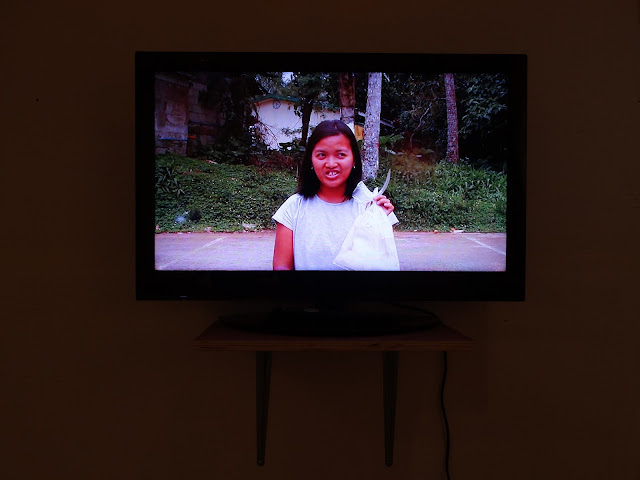 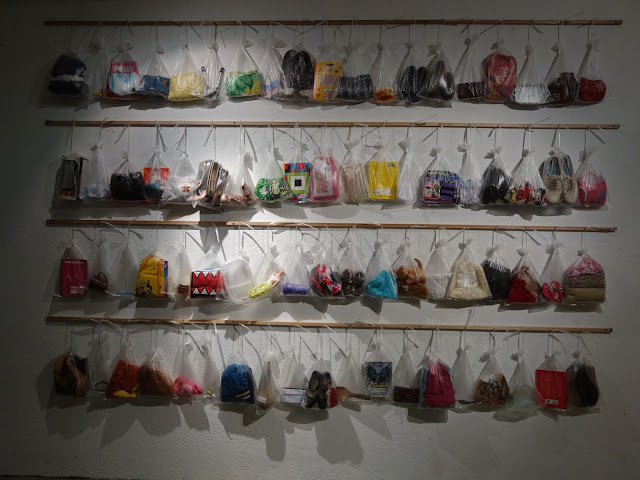 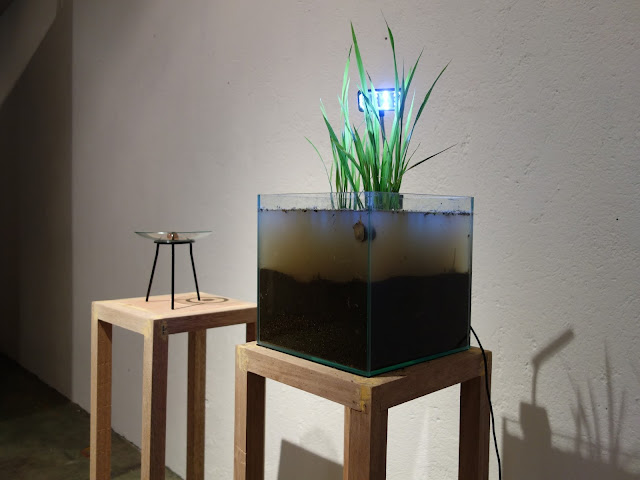 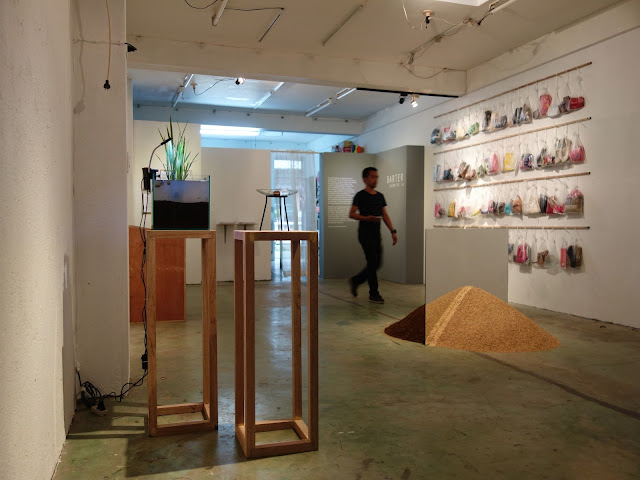 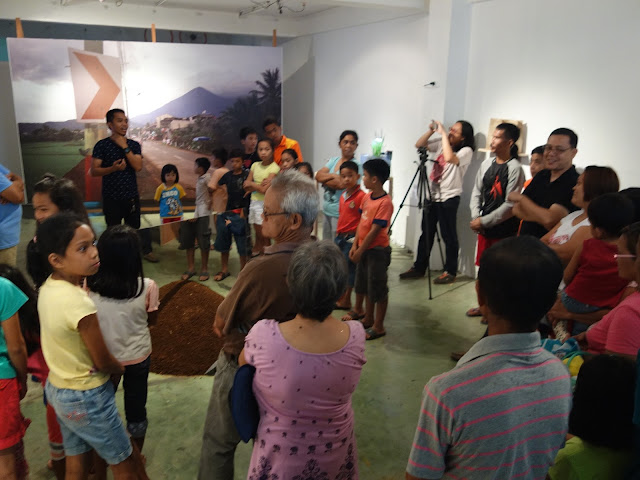 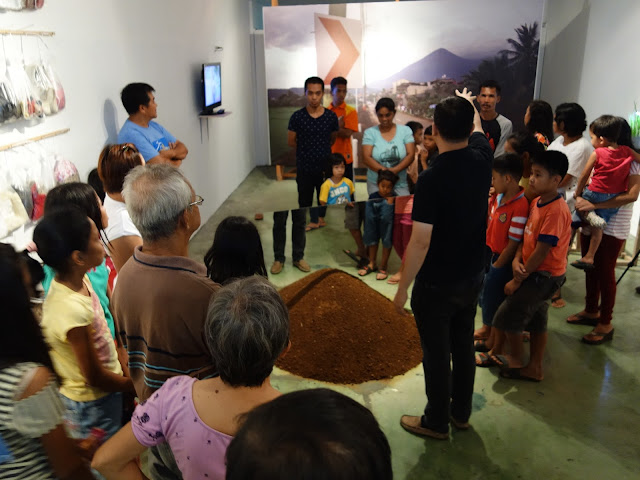 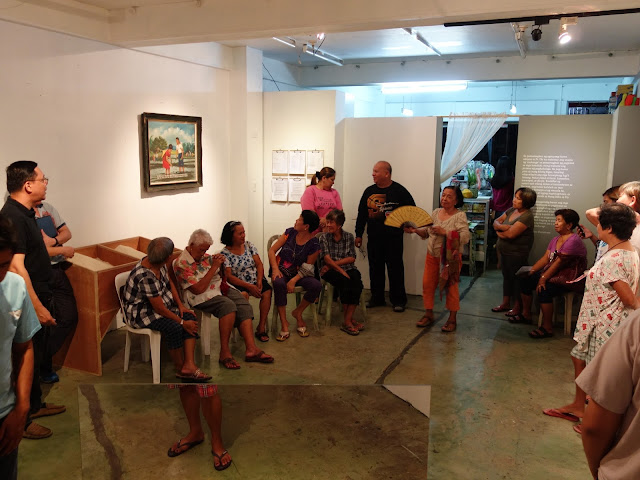 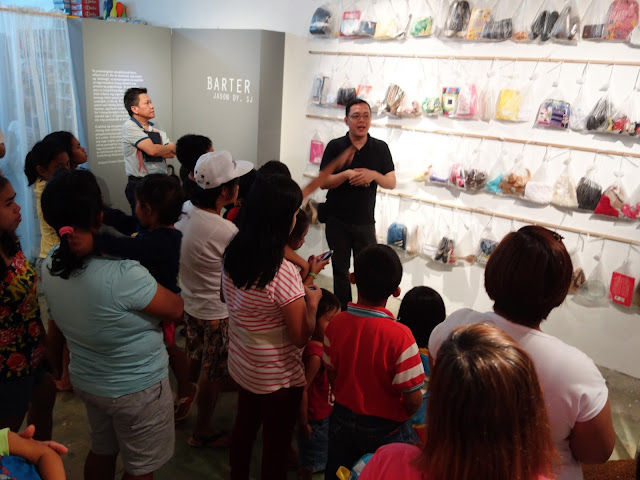 As an artist-led platform that develops traditional, alternative and emerging art approaches, Project Space Pilipinas (PSP) supports Barter as a socially oriented and collaborative art project that I conceived and proposed to its curatorial team led by director Leslie de Chavez and curator Jacqueline Ali. I am generally interested in attending to the changing religious and cultural circumstances, locations and events through my community and studio based art practices. My current art project is informed by socially engaged creative practices that attempt to break away from conventional modes of art exchanges, i.e. institutional and commercial, and to propose an alternate route of engaging people who are at the peripheries of art discourse and interaction (cf. Decter, 2014, pp. 16-17).

Barter has evolved from the initial impression and commentary to the incongruous government answer to the El Niño stricken Kidapawan farmers last 1 April 2016 (as hinted by the rice scooper created from cut down 6-pounder shell casing, 57x306R, 1890s-WWI) to the specificity of PSP’s exhibition space in Lucban as a site of multiple encounters and exchanges with artists, curators and the local community. The notion of barter though treated as a “myth” as well as a “thought experiment” by several anthropologists who disagree that this kind exchange of goods was a precursor of money as popularly posited by 18th century Scottish philosopher Adam Smith (cf. Strauss, 2016), is proposed as a discursive framework of reflecting on the multiplicity of interactions of the site.

The main feature of the art project is Practice of Bartering, an off-site engagement with the community of Barangay Piis, Lucban, Quezon. PSP, through de Chavez, has connected with the community in collaboration with the local Barangay Council of Piis and with his own paternal clan who were former residents of the said barangay. The PSP team had facilitated outdoor painting workshops with the youth during the clan’s annual Hagaran, an outreach program through sports and arts since 2010. After the ocular visit of the barangay, I intuitively saw the potential of initiating a barter of rice grains with any objects chosen by the community members. Some community members may respond to this invitation because rice is their daily staple food. Others may be sceptical as why they need to exchange almost one kilo of rice with any possessions they have. Even if I offer limited editions of typewritten and signed Certificate of Sponsorship by those who donated rice, some community members may still ask, “Why not just give the rice for free when they were contributed by other artists, galleries, collectors and project donors?” In this way, the community and I will negotiate on the values of goods exchanged and discuss the possibility/impossibility of a reciprocal interaction. A video documentation of the process of bartering and recorded individual intentions of trading their chosen objects with rice are displayed at the PSP gallery as well as the bartered objects as artefacts of the engagement.

In recent times, Lucban has found itself in the junction of emerging transition from a rural, agricultural town to a municipality of booming local enterprises supported by government infrastructure of new road network at Lucban/Sampaloc Main Road as well as the sprouting enclaves of residential subdivisions. In this context, I will attempt to investigate the impact of the broader socio-economic development to the individual, to group consciousness and to the capacity of communal exchange of goods. The impact of this on-going development is captured by the large digital print entitled Intersection of Contending Rural Developments. It is a photograph of the main road before turning left to No. 6 Eleazar Street, the current location of PSP gallery. Mt. Banahaw looms large from the distance witnessing the contending rural developments at its foot characterized by the sturdy green growth of rice seedling on its paddies as well as the mounds of earth to be used as landfill for the road widening and a new route. As the set-up of the work Protected/Vulnerable Agricultural Landscape suggests, the agricultural sector of the community may assert its major contribution to its economic viability and as a cultural referent to the annual Pahiyas Festival in celebration of St. Isidore, patron saint of the farming community. They are also keenly aware of a threat of land conversion into residential and commercial zones. The exhibition looks into how a community like Lucban, will traverse and contend with the repercussions of economic growth, the devices of agricultural life, and the pertinency of cultural celebration of a bountiful harvest and the artist’s attempt at repositioning barter as one of the lenses by which we understand contemporary exchanges in art and society.

This negotiation of goods entails the key issue of value according to the London-based anthropologist David Graeber. For Graerber (2013), the valuation of goods is important in the social worlds “not just as a collection of persons and things but rather as a project of mutual creation, as something collectively made and remade.” However, in the barter mode of exchange like other modes of contemporary exchanges, the values are uneven. How do partners reach a consensus of meaningful exchange? Will it be from the mutuality of needs, trust in the ethics of give-and-take, or the valuation of gift-sharing that could be deceiving in circumstances of uneven power distribution? How do they guard themselves of the danger of perpetuating an uncontrollable world where only a few people profit well from the exchange while the rest find unjust?

Adhering to the observation noted by Graeber that in the conception of production, after the ideas of German social philosophers Karl Marx and Friedrich Engels, it (production) “always means the production of material goods and social relations—and therefore, by extension, human beings, who recreate themselves and each other in the very process of acting on the world” (Graeber, 2013). In the exchange of produced goods for the socio-economic growth of Lucban, social relations are vital for it provides a space for mutual enrichment. Thus, it is important to be critical of the relations of power to ensure this common welfare. To ensure that this mutuality is promoted, together with the PSP team, we had an orientation with the local community about the project, sought their consent in displaying the bartered objects and their interview, provide them with infrastructure to visit the exhibition space, and revisit them again to reflect together on the experience of this project.

In this project, I look into the circumstances of those involved in the social exchanges of a community confronting and reconciling the changing landscape of their rural town. Dependent on the contextual standpoint, the work Mound of Multiple Perspectives, the half-mounds of unhusked rice grains and red earth linked together by a double-sided mirror, impresses the possibility of multiple views. At one point, the mound can be perceived as a whole and at another point, it is realized that they are different from each other. In barter, values are arbitrary, the value of objects up for exchange are dependent on who is giving the value.