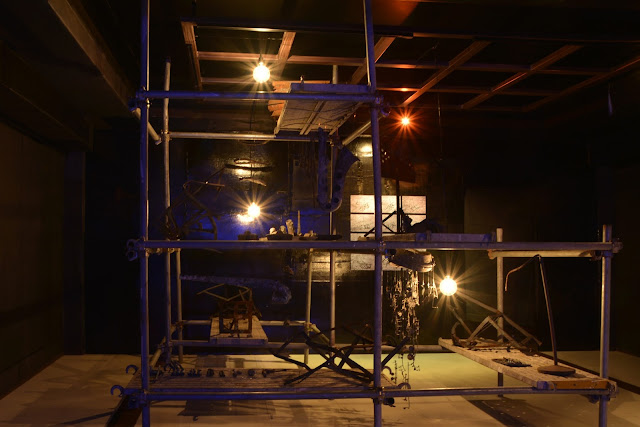 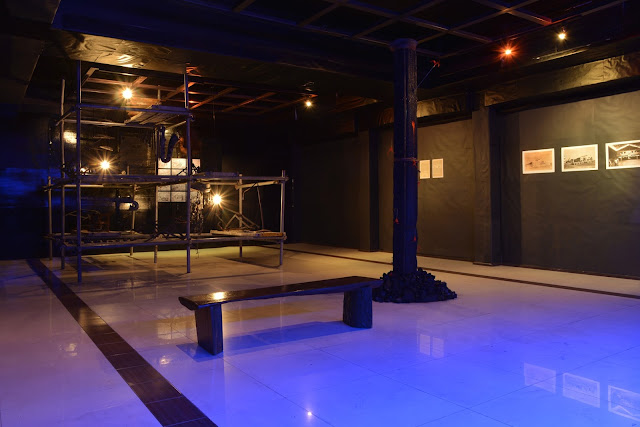 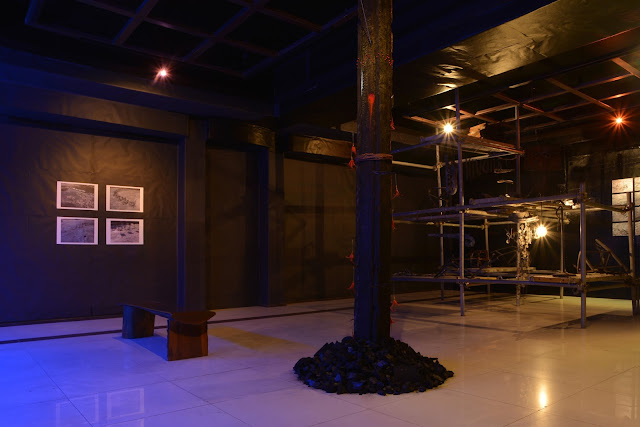 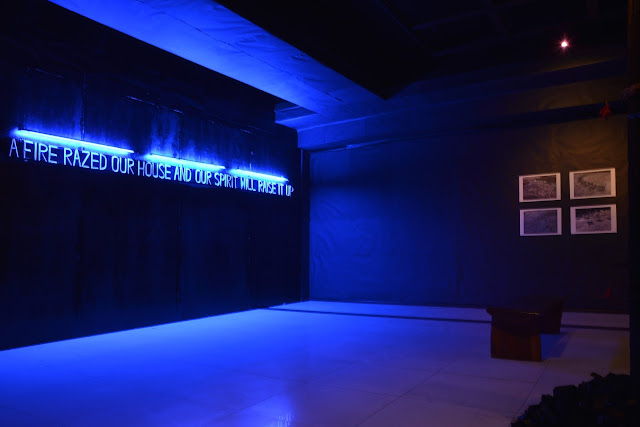 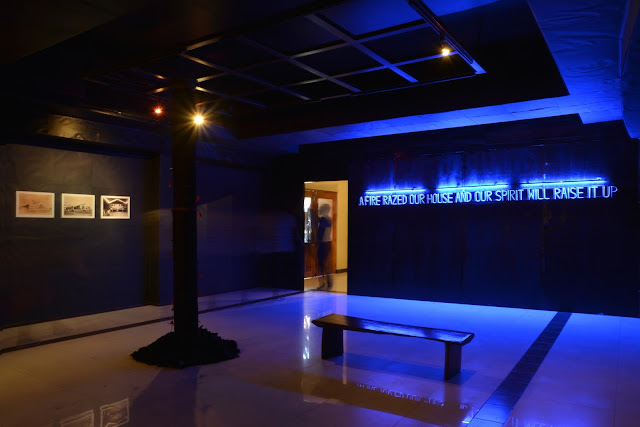 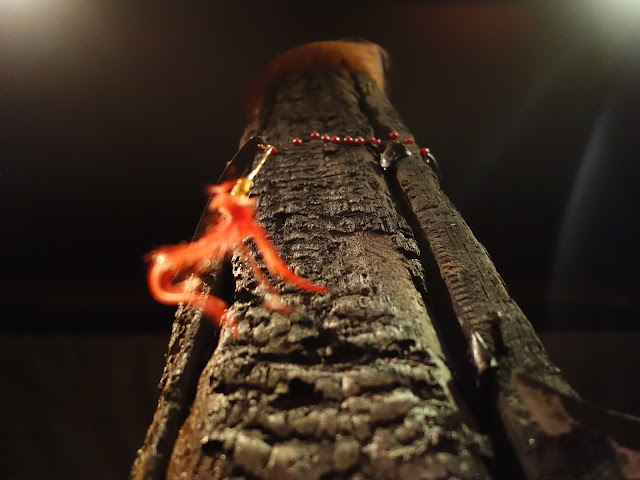 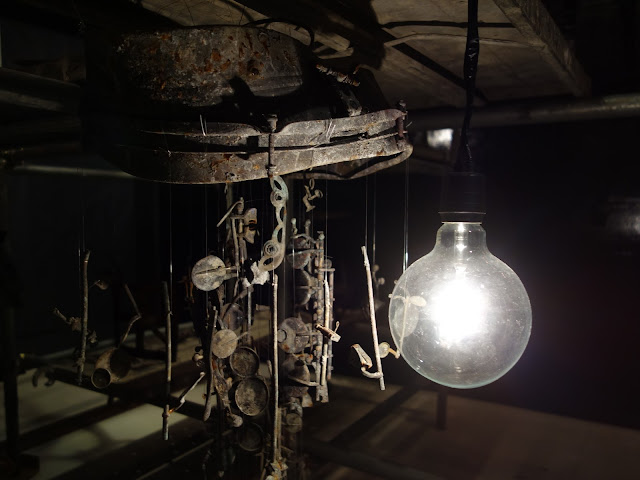 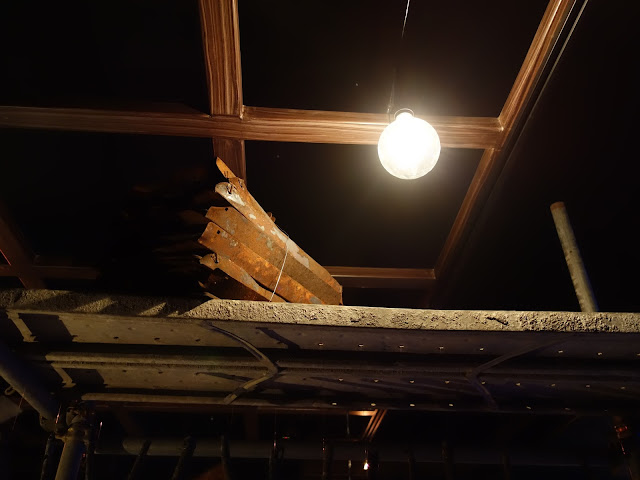 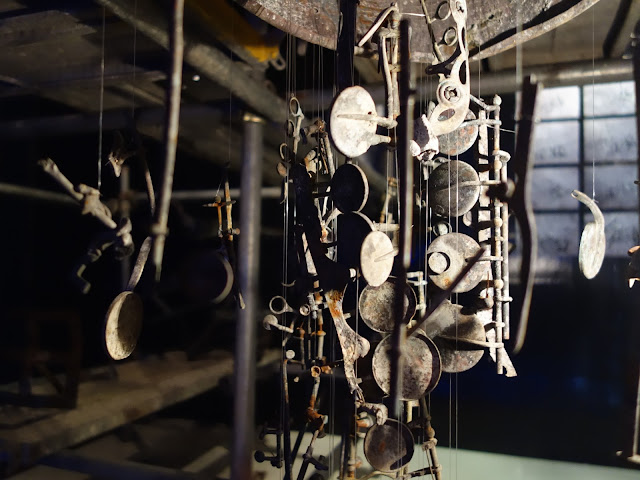 Silent Concert is a two-phase art installation project. The first phase consisted of three arcs formed on the site of the fire that razed to the ground at the Brebeuf Gym last 7 July 2016. Using the charred remains of the building, the art installation was an initial and impromptu response inspired by a photograph of the burnt musical instruments of the University Band posted on social media.

The first arc is currently displayed near the burnt acacia tree beside the Senior High School Building. It is composed of the debris piled on top of one another supported by varying heights of scaffolding reaching up to ten feet high. The cascading assortment consisted of scorched wooden posts, warped corrugated GI sheets, rusting air conditioner units, twisted window metal grille, damaged cooking stoves, burnt constitutional law books, tangled wires, exploded parts of computer hardware, and other burnt debris arranged to resemble an unfinished nest that descends along with the carefully assembled parts of the corroding bronze music instruments. This arc provided a backdrop to the two smaller arcs: the fan-like assembly of the reconstructed music stands that support themselves, and the semi-circular row of distorted metal armchairs in rising and fall progression. The armchairs are stable yet dynamic. No need for human intervention to re-stand a fallen music stand toppled down by the occasional gust of wind. (These two smaller arches are now dismantled due to the space requirements of the food concessioners during this year’s Ateneo Fiesta.)

If these two smaller arches either pointed to the harsh reality of utter destruction or to the prospect of re-construction, the main arch proposed the cooperative paradigm of rebuilding the infrastructure reflective of the indestructible spirit of providing the quality site of learning, creativity, and growth. As AdZU President Fr. San Juan, SJ put it in his homily during the Solidarity Mass the day after the fire broke out, “[w]e shall rebuild and we shall rebuild together.” Like the lined-up assortment of microphones and music stands installed near the main road, wobbly yet sturdy, the efforts of reconstructing and fundraising may be daunting, but through concerted efforts, the rebuilding of ground zero would not be far off.

The second phase of the art project is the SILENT CONCERT currently showing at the Gallery of the Peninsula and the Archipelago (GPA). More than a documentation of the fire incident and nostalgic revisit of the former glory of the Brebeuf Gym built in 1949, the show provides a space for contemplative and critical reflection on the ideas of ruins, resiliency, and rebuilding. The past is revisited in a form of a memory stored in archival photographs taken from the archives of the Philippine Province of the Society of Jesus.

German sociologist George Simmel described the aesthetics of ruins as caught up in “the great struggle between the will of the spirit and the necessity of nature issues into real peace, in which the soul in its upward striving and nature in its gravity are held in balance” (Dillon, “A Short History of Decay”, Ruins, 2011, p. 13).

In this exhibit, a welded text painted white and illuminated by an ultraviolet fluorescent light reads, “A FIRE RAZED OUR HOUSE AND OUR SPIRIT WILL RAISE IT UP.” This echoes Simmel’s idea of the great struggle between the natural forces such as fire ruining the domestic abode and institutional infrastructures and the defiant human will to survive.

In his 1911 essay “The Ruin”, Simmel privileges the organic reading wherein nature has the upper hand due to its entropic powers. Re-echoing the AdZU Fiesta 2016’s theme: “Animo Ateneo: Tested by Fire”, the exhibit appropriates the indomitable spirit that would not be quelled by elemental forces by showcasing instances of resiliency and rebuilding.

A sculptural installation consisting of charred posts embellished with laring-laring iron knives, red feathers, 10-karat gold strings, red beads, and charcoal, is mounted in honor of the courageous spirit of John de Brebeuf, one of the North American martyrs and the patron saint of the former gymnasium. The spirit of martyrdom inspires the virtue of resiliency for it taps into the same wellspring of faith—belief in the resurgence of life even after death.

The unusual set-up of a rectangular enclosure with two openings within the gallery also points to the interior of a black box as well as the exterior of a white cube. Though not a commentary of how objects are displayed in modern and contemporary art galleries, the design of the exhibition space offers some ideas on how sometimes the engagement of contemporary art disrupts the architectural conventions of traditional art and ethnographic museums such as the GPA.

On another level, the darkened space made up of re-purposed plywood sheets and black craft papers allows the viewers to immerse themselves in the grim reality of fire and making sense of this reality as one gropes in the dark searching for light or as one’s eyes adjust to the night and gradually sees in the shape of things emerging in one’s environs.

In the end, reiterating the message of the university president who said, “[a]n icon was burned, but the Ateneo animo, or spirit, shall continue burning.” Thus, this two-phase art project presents a stubborn insistence on creating meaning out of the fire rubbles that could either be just a cathartic expression of the unfortunate event or an affirmation of the indomitable communal spirit of igniting the passion for rebuilding from the rubbles and rising from the ashes. 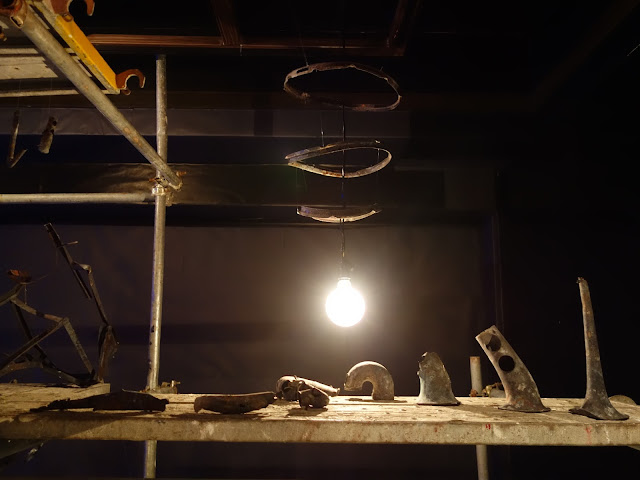 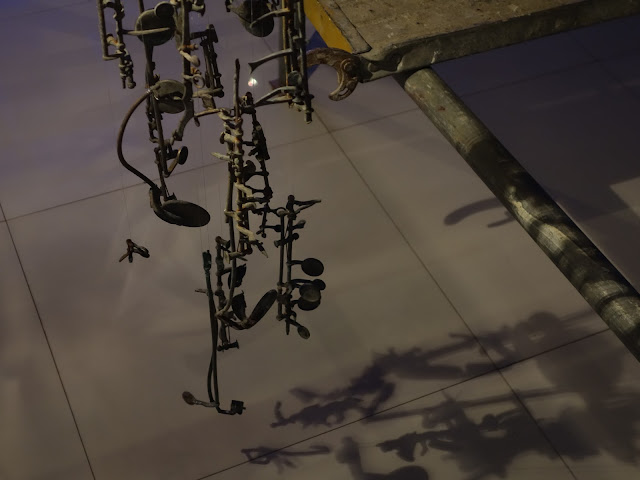 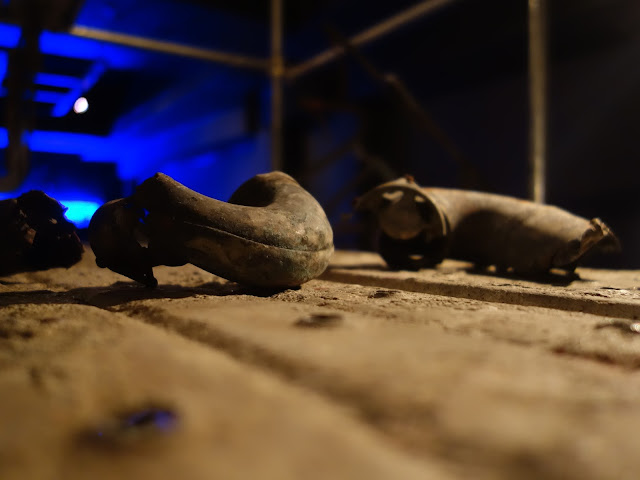 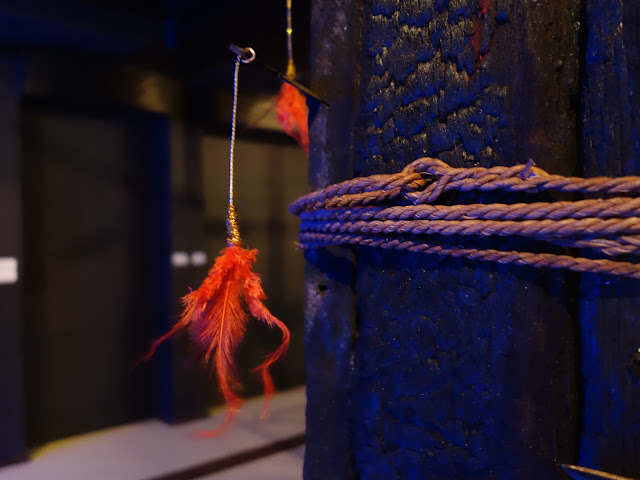 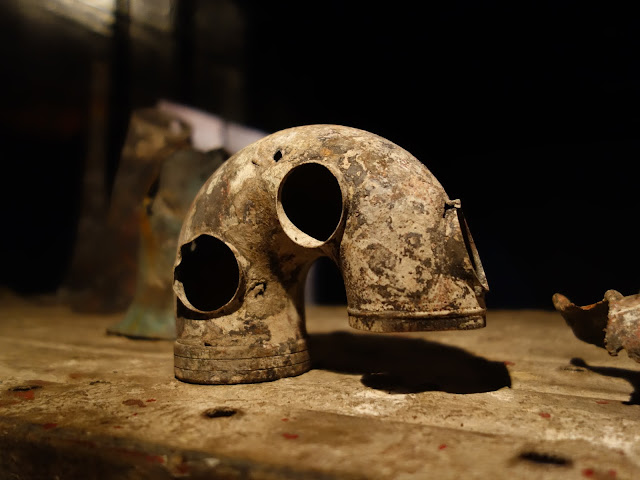 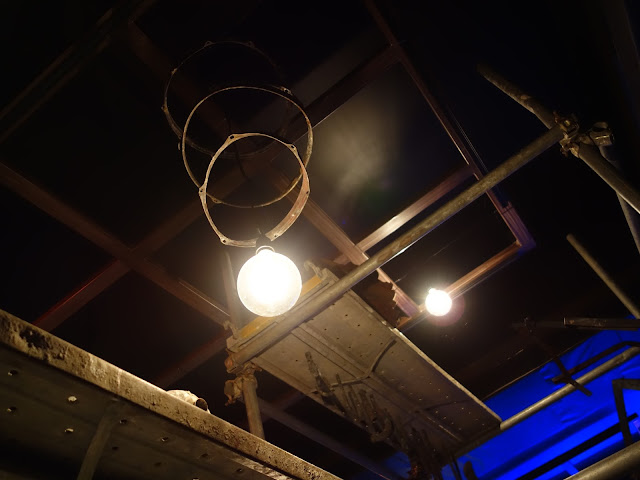 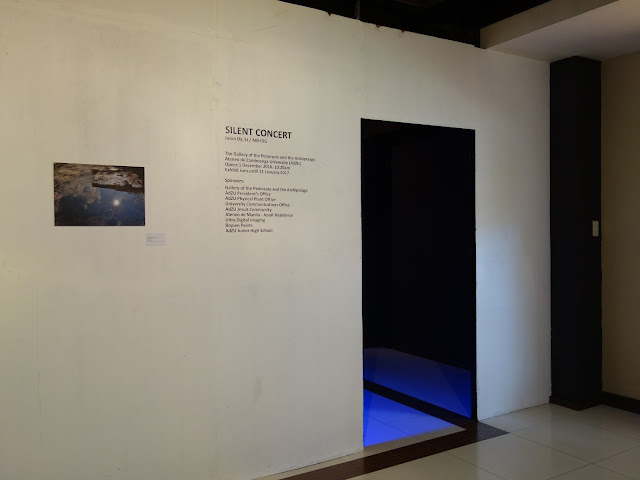